Brașov is a major city in Transylvania. It’s just a province in Romania, but that doesn’t sound as cool as “the Vampire Country”. Yes, this is the land that Bram Stoker envisioned as the stage for his famous story. Or so they say, because there is no actual evidence of Stoker ever visiting these areas. He did take interest in Vlad the Impaler, the infamous warlord. It is a good tourist magnet, especially the Bran Castle. It’s small and creepy as hell. Hidden passages, puzzle-like chambers; very cool stuff. It can get a little bit crowded, but it’s still worth the trip. However, there is no historical evidence of Vlad the Impaler ever taking a single step in there. Locals are rarely even bothered with that whole vampire hype. You’d expect plastic fangs around everywhere, but Brașov is free of all that. They eat a lot of garlic because it’s delicious and antibacterial, not anti-vampire. Most cultures have some kind of bloodsucking creature folklore. In Romania’s case, it’s the Strigoi. It’s Dracula, but more of an animal without the noble side to it. It’s funny to see how every place in the world has its own vampire story. Europe, Africa, Asia, it’s almost as if they were real. 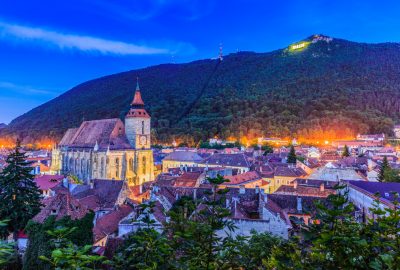 There are far more terrifying things in hills and woods surrounding Brașov. Bears and wolves are a real danger in modern days. And they were even more so during medieval times. I can imagine how people came up with tales of shape shifting demons. Trekking the Tâmpa mountain, overlooking the city is one of the coolest activities you can partake in. There’s a giant sign resembling the one in Hollywood that says Brașov. You can climb right up there. The view is stunning. All those clay roof tiles down below belong to the historic district. Fun fact: Vlad the Impaler impaled 40 merchants at the top of the mountain. That’s what you got for tax evasion back then. There are tunnels beneath the mountain. German prisoners of war were held there following World War I. Some people even believe there’s a lake INSIDE the mountain, so they couldn’t dig too deep. This place is more mysterious than one might think. Make sure you don’t stay too long. The cable cart closes after dusk and getting to the city on your own is risky. Remember about the bears, they’re no joke. 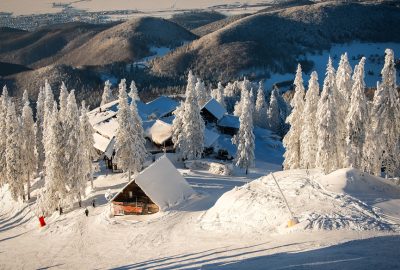 The Old Brașov was a city of wealthy merchants. One could say a Romanian version of Florence. It’s still medieval through and through with the mandatory town square and fortifications included. Most of the stuff is in a pristine state and open for tourists. The Council Square is a good place to start exploring Brașov. Legend says this is the place the Pied Piper led the children of Hamelin to. The Rat Catcher who used a magic flute to control the rodents. It was a folk tale, long before the Goethe or Brothers Grimm and it originated around these parts. The Old Town Hall stands overlooking the plaza. It used to function as the seat of the council, but now it’s a museum. Only the part dedicated to medieval history is somewhat interesting. The Black Church is the next landmark in the area. It’s not black, but it is the main Gothic church in the whole of Romania. Why the name then? Because of the Great Fire that destroyed most of Brașov in 1689. You can take a tour of all the towers along the city walls. Some of them have been converted into museums, some into archives and some have been left untouched.

Brașov’s true charm lies in exploring all the nooks and crannies of the Old Town. The Rope Street, one of the narrowest streets in Europe is one of those local peculiarities. It used to be a corridor for the firemen, but they changed it into a tourist attraction. It recently became an open-air museum/gallery. Brașov is not a huge, bustling city with crowds of tourists. And that’s a great thing. You can relax in cafes and restaurants, or take part in pretty chill nightlife. Poiana Brașov is a great getaway just outside of the city. It’s mainly a ski resort, but it’s not exactly abandoned during summer either. You can enjoy various spa treatments, or spent your time hiking, or work on your horseback riding skills.