Glasgow stands out as a city of stark, hardworking people. That describes Scotland in general, but this particular city has a distinct industrial feel to it. I love it. Things don’t peacefully “flow” in Glasgow, things plow through like a tank. It’s dark, loud, indelicate and uniquely beautiful. It’s the kind of place that nourishes a melancholic talent. Franz Ferdinand and Mogwai; both bands started out in Glasgow. So did Grant Morrison, whom I consider an amazing artist. He’s not a musician though; he’s a comic book author. He worked on my all-time favourites like the Hellblazer and Doom Patrol, among many others. Morrison is also a bit of an occult philosopher. He can go on for hours about how our perception of reality is similar to comic book pages. Nerd alert! Enough of my babbling. Take a walk around Glasgow and see what pushes its people to extraordinary deeds. It’s a wild ride.

If you want to plunge into the atmosphere of the Middle Ages, then you should visit the University of Glasgow; founded in the 15th century, it is one of the oldest universities in the world

There is no better place to learn about a city than its cemeteries. The one in Glasgow is on par with the most beautiful European necropolises. I’d say it’s symbolic even. Bridge of Sighs, one of the main entree ways is a monument by itself. It was built over the Molendinar Burn, a settlement laid fundaments down for Glasgow. The cemetery rests on a hill. Getting to the top takes a little bit of effort. It’s worth the trip; the view is stunning. It’s a place of treasure hunters and thrill-seekers. People are obsessed with these old Victorian cemeteries. They think there are Masonic secrets waiting to be discovered. Mausoleums of Glasgow’s former rich and famous are the most interest part. They are the founding fathers of the city, so to speak. 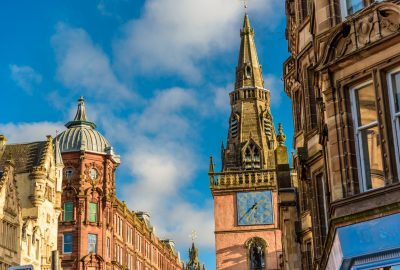 Trongate street is one of the oldest streets of Glasgow and the former city center in the Middle Ages, Toolbooth Steeple tower on the same street is one the towers marking Glasgow's impressive skyline

The wealthy merchants, shipwrights and the Tobacco Lords (aka the tobacco dons): those guys were businessmen through and through. They got the cheap stuff from English colonies and held all tobacco trade in their grasp. That allowed them to amass such wealth that they practically became nobles. They built mansions and churches that defined Glasgow’s architectural style. You know, like all this old concrete stuff that always looks damp and dirty? William Cunninghame's mansion is one of such buildings. It currently functions as the Gallery of Modern Art. There is a district called The Merchant City in Glasgow filled with that kind of stuff. Even the famous Buchanan Road is named after one of the Tobacco Lords. Anticipate upscale shops, restaurants, that kind of stuff.

Most of the really old stuff is centred around the Glasgow Cathedral. St Mungo Museum of Religious Life and Art is located on the same grounds. They claim to be the only religious-focused public museum in the world. There’s a charming Zen garden with stones that look like they remember the Celtic times. Provand's Lordship is the oldest house on the opposite side of the street and was built in 1471. There’s a museum inside if you’re curious how people lived in medieval times. Seeing these almost 600 years old structures standing next to an asphalt street feels weird. I have to admit though that the courtyard leading to the Cathedral is awesome. Celtic Connection Festival is something to consider if you’re interested in traditional/folk Scotland.

The Lighthouse Building is a former Glasgow Herald headquarters. It was designed by Charles Rennie Mackintosh, the famous Scottish architect. Nowadays it functions as the Centre for Design and Architecture and a charming space for creative individuals. You can climb the tower for a great view of the city as well. Hop on the Glasgow Subway and head for West End for some fun. Even the subway is a landmark, it’s the third oldest in the world. They got those cute, tiny stations and trains move in a circular raceway kind of a track. Once in West End, inhale a giant whiff of that familiar stale ale and formalin stench. This is the university district, packed with knowledge, museums and cool restaurants. Dig a bit deeper and you’ll end up in Finnieston, the hip central. The Ox and Finch restaurant comes highly recommended as an accessible high dining venue. That’s code for “posh, but still chill”. Don’t miss the nearby Clydeside Distillery. It’s not only a well of knowledge about scotch whiskey, but also a valuable part of Glasgow’s rich history.