Kuala Lumpur is the most confusing and worst marketed Asian city on earth. It’s the second most liveable city in South Asia (after Singapore) and one of the world’s crucial economic centres. The most remarkable quality of KL is how it managed to unite their Chinese, Malay and Indian populations. Those three waged wars against each other for rich tin deposits in the late 19th century. The Chinese captain Yap Ah Loy (Ah Loy, alloy, tin alloy? Suspicious?) eventually won and alongside Frank Swettenham began rebuilding Kuala Lumpur. What’s up with those names? It all sounds made up. Anyway, those two were the founding fathers of this city, transformed it from cholera-ridden, flammable wooden huts into what is it today. It is a one of a kind union of three nations living in harmony. I’d even say they supplement each other. Imagine not fighting over nationalities, religion or customs nowadays. It is rare. Kuala Lumpur is big on religion, Islam mostly; almost 60% of the citizens are Muslims. It’s pretty mild in KL; nothing strict like the Emirates. You can visit a mosque or two but they’re nothing special. Hindu temples are an entirely different story. 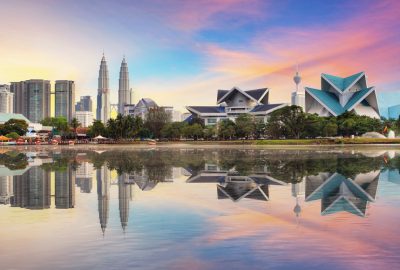 Titiwangsa Park: a well-kept and picturesque park at the lake in Kuala Lumpur, offering various leisure and sports opportunities for adults and children

You need to see the Batu Caves. They’re located about 15km away from KL and, according to some sources, are over 200 million years old. The uninhabited portion of this complex is called the Dark Caves. They’re dark and full of terrors, spiders, bats and all kinds of species you won’t find anywhere else. The whole site looks like a training ground for Jedi knights. it’s dope. Hindu pilgrims visit these temples annually for the Thaipusam Festival, join them and learn more about this fascinating religion. You could also check the Brickfields neighbourhood in KL. That’s where most of the Hindu community resides and shops with goodies such as spices and traditional clothing (sari).

If I had to point out one iconic thing about Kuala Lumpur, I’d go with the Petronas Towers. I don’t understand the pissing contest, like who builds the highest tower but it’s immensely popular among tourists. You need to buy tickets in advance and if you’re late for the appointed hour: too bad, you can’t enter. You also can’t bring any selfie sticks or tripods. I think that’s awesome. I love it. The view from the bridge connecting the two towers is amazing I have to admit. What’s in those towers? You guessed it: offices, corporations, and modern slavery. Oh, and one of the largest shopping malls in South Asia. Kuala Lumpur is relatively cheap and shopping has been growing into a huge part of this nations’ economy. It’s also why so many tourists decide to visit.

Putra Mosque, located 20 kilometers from Kuala Lumpur, also known as the Pink Mosque due to the pink granite used in the facade cladding, is reflecting in the water of an artificial lake

I would rather go relax around the KLCC Park, a beautiful green area providing contrast to the Petronas Towers. It’s also where the busy businessmen from the convention centre take a breather. So it is a sort of a Kuala Lumpur’s Central Park with public pools, water fountains and jogging routes. Aquaria KLCC located at the southern edge of the park and it’s really cool if you’re into that sort of thing. They got shark diving, shark feeding shows, and san underwater shark tunnel: basically all sorts of Shark Week shenanigans. Kuala Lumpur is generally big on nature, after all Malaysia is covered by rainforest. You can see some of that fauna and flora in the KL Bird Park, it’s like a zoo but for birds only. I’d recommend wearing a raincoat because of the deluge of droppings but you’d boil alive in that heat and humidity. So at least wear a hat. Their homepage has a photo of a parrot eating a chili pepper, how can you say no to that?

All the people who have experienced Kuala Lumpur have one thing in common. The towers are forgettable, parks and shopping are fleeting pleasures, but the food? Malaysian food stays with you forever. It’s where the triage of Chinese, Indian and Malay delicacies comes together. Picture different kinds of curry, butter chickens, grilled meats and, of course, metric tons of rice. Traditional Malay breakfasts should give you a good idea about what to expect. They boil rice in coconut water with spices and serve it on banana leaves with various toppings. You get a bit of fish, rice, some veggies, a few drops of sambal and you eat it all with your hands. It takes practice, but it’s what you want after a night out in KL. Bukit Bintang is where the party’s at: best bars and clubs in Kuala Lumpur conveniently bunched up on one street.