“Ljubljana” sounds familiar doesn’t it? I think everyone can understand any language to a degree even if you come to contact with it for the first time. It means “lovely”, or “beloved”, a very affectionate name to call the capital of a nation. Ljubljana is that sort of a city that evokes feelings of absolute bliss. That means at least the very old stuff. The “modern” concrete blocks are revolting. The Old Town is gorgeous, similar to most central and eastern European ones. There are also some differences though. The city has those clear Italian accents here and there. Suffice to say the “Slovenian Florence” nickname is well deserved. The Ljubljanica, the river that flows through the Old Town, is rather narrow and reminds me of the canals of Venice, but with a Slavic twist. The river is also the centre of Ljubljana’s nightlife. Some of the best cafes, clubs, and restaurants are spread around its embankments. They don’t have gondolas here, but they do organize cruises on boats and canoes. Close enough. Jože Plečnik, who is a bit of a local icon, designed a lot of architecture of Ljubljana. Many landmark bridges and buildings have his signature and he even designed Prešeren Square (Prešernov trg in Slovenian), which is instrumental to the city’s layout. 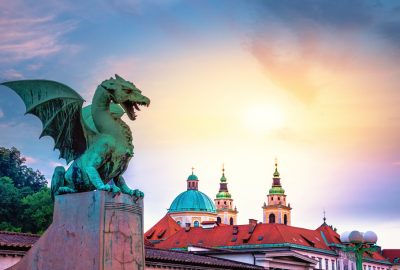 The Dragon Bridge, one of the symbols of Ljubljana, appeared in the city only at the beginning of the 20th century, when Ljubljana was recovering from the effects of an earthquake

You’ll notice the colonnades and arcades alongside the river. That’s why people compare Ljubljana to Florence and its Ponte Vecchio. Locals have their own iconic bridges. The Triple Bridge is one of those. It used to be a wooden bridge back in the early 13th century. It got reinforced and eventually expanded into three segments. The Dragon Bridge so another iconic crossing in Ljubljana. In fact, the dragon is the city’s symbol. There are two origin stories, which are basically the same, but culturally different. Some scholars think it was the beast that Jason killed in the Argonauts. Others go the St. George route. A beast supposedly roamed the marshes outside of Ljubljana. St. George, the slayer of dragons, came to tame the drake and then kill it. Why tame it if you’re going to kill it? It makes no sense. George became the patron of the city and has his own chapel in the castle.

The Ljubljana Castle is one of the most important sites in the city. Locals usually steer away from such tourist magnets, but not here. The castle is a central part of Slovenian capital life, the “peak of the city” as they say. People organize various events like concerts and theatrical performances. It’s not your usual medieval castle but more of a cultural centre. It’s like the main Old Town’s square, but on a hill. Even the architecture is unique; they blended modern, glass elements with the ancient walls. Restaurants on site are surprisingly futuristic. Especially Gostilna na Gradu and Strelec boost an excellent reputation and serve a delicious local sausage you just need to try. You can take the funicular, or walk straight to the top. Your options are limited only to your imagination once there. You can work on your tan. You can take a guided tour, or explore on your own. They even do wine tastings since they’re growing some ancient vine in the courtyard.

The Franciscan Church of the Annunciation, one of the most important temples in Ljubljana, located on Prešeren Square, near the Tripple Bridge

Ljubljana is a university city, so much so that it feels like a huge campus. They’re big on reading there. The Ljubljana Castle even has special reading corners and a book exchange. The Scryptorium is open to the public, where you can learn how books were written back in the Dark Ages. Medieval calligraphy is true art; it never ceases to amaze me. Metelkova is the place to be if it’s art that you seek in Ljubljana. Old military barracks turned into a freethinking commune looking like Tibet. It’s one of those places that the government wants to take down, but they can’t. They have a bunch of people squatting there, but Metelkova is also shaping up into some larger. Ruins are turning into wonderfully greasy pubs, bars, and hostels. It reminds me of cities as Budapest where ruin pubs have become the new hot thing. Metelkova is really chill, almost psychedelic place. This is where Ljubljana nightlife moves when everything else closes down, especially when it’s warm outside. Few beers, a handful of magic mushrooms, and who knows? You might stay there for good.