“Tbilisi!” gurgled the hideous creature as it slithered through a narrow corridor. “Tbilisi!!!” roared from its innumerable maws when it bared its fangs! …I’m just messing around. But to my humble opinion Tbilisi sounds a bit like a monster from a Lovecraftian horror. A name straight out of an ancient scripture, or an arcane spell. A Dothraki battle shout from Game of Thrones? I could go on like this forever. The truth is much more mundane. It’s the capital of Georgia, the one in the eastern hemisphere. It’ located at the intersection between Europe and Asia. Tbilisi is very unusual, almost as if someone invented it during a dream. Legend has it that the area was discovered by King Vakhtang I of Iberia during a hunting trip. He smelled something funny and realized it was a natural hot spring, one of a sulphuric kind that stinks like hell itself. He went on and built Tbilisi in that one spot that reeks of rotten eggs. The capital developed rapidly thanks to its proximity to the Silk Road. Thousands of wealthy merchants passed through here, some opted to stay. It was not only a centre for money in the region but also a place for a tremendous cultural exchange. That also made it a target for different military empires. Tbilisi went through many sieges by forces such as the Romans and Turks to – until rather recently – Soviet occupation. 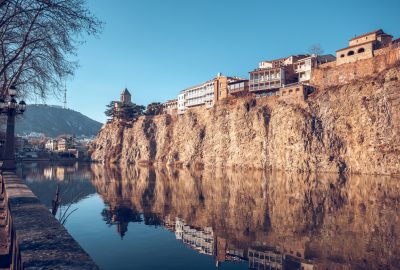 The Kura river, which originates in Turkey and flows into the Caspian Sea, runs through the historical centre of Tbilisi; in Georgian language the river is called Mtkvari, which means "Good Water"

Experience that mish-mash of cultures in Tbilisi’s Old Town. It looks like you smashed a Turkish town, a small Italian village an Tibet in one area. They built it on top of a ravine overlooking a beautiful waterfall and a wooden bridge. Look further uphill and you’ll notice the Narikala Fortress, easy to spot at night when it’s illuminated. Parts of it have been standing there since the 4th century. Getting to the top can be a bit of a life-threatening endeavour, but the view is worth it. Walk back down to burn extra calories. Now you can take a dip in the legendary hot springs to rinse all that sweat off. They built magnificent underground baths like the ones in Rome or Turkey. It’s more of a spa treatment; you can have a massage and all sorts of pampering before the main event. They say that the water is great for skin, digestive, sleep and against impotence. I’m not convinced since none of that has been scientifically proven. Also, I’m not sure about a bath after which you need another bath to get rid of the smell.

There are many examples of Soviet style architecture in Tbilisi. Most of it is currently abandoned and that only adds to the creepy tone of those buildings. You’ll be seeing concrete apartment blocks everywhere. But some stand out like the ones in Saburtalo district. Those look like buildings from the “High Rise” movie. They’re linked to one another with steel bridges, which look like they could fall apart at any moment. Then there’s the former Ministry of Transportation building, now the Bank of Georgia. To be honest, it looked better when it was abandoned. They call it a marvel of Soviet architecture but in my opinion it looks like a stack of Duplo blocks put together by an infant. Archeology Museum is a short drive out of a town and it’s unreal. It resembles a giant tomb or a mausoleum. You can book a tour of this and many more abandoned buildings. Be cautious in case you want to enter them. Keep in mind that they’re sometimes not as abandoned as they may seem. Squatters, junkies and homeless people like to hang out in those. 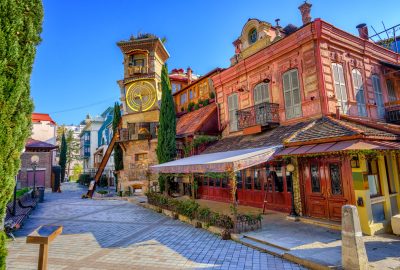 The clock tower built by Rezo Gabriadze in 2010, next to the marionette theatre in Tbilisi charming's Old Town: every hour an angel pops up to ring the bell with a hammer

You’ll see a lot of Stalin memorabilia around since he was born in Georgia. Walk around the weekend market and you’ll notice people selling tons of interesting stuff. Gas masks, military decorations, swords, jewellery, and glassware, whatever comes to your mind can be bought. Actually everything an Eastern European babushka could find in her cabinet is for sale here. The Museum of Stalin Propaganda is the best thing ever. An older guy who doesn’t speak English runs the place. He used to be pretty high up the Georgian Communist Party ranks and he’s a fountain of knowledge. The printing press at the times the Bolsheviks had not seized power yet was like 15m underground. They had to climb down a well to get to it. There was a tunnel a few centimetres above the water, which led to another tunnel with a ladder. Then they had to crawl into the actual printing room. You can say what you want about Communists or revolutionaries in general but they did not go for the easy way usually. There’s a staircase now but the guide will sign language you through all the juicy details.