I always thought that the only way to get to Bali is on a seaplane. I had this very detailed fantasy in my head. We land, I walk off straight into the water because it’s only knee-deep. I grab my girl and we get escorted to the shore by a bunch of those tropical swimming pigs. We settle down in our cosy bungalow sipping fresh coconut water. The dream. That’s what people show you; the bamboo huts and beach resorts. There is so much more to Bali and it is mostly ignored by mainstream tourism. People arrive at the Ngurah Rai International Airport, it’s about 13km south of Denpasar. That’s the criminally underrated capital of Bali. Ironically, this might be one of the few places on the island not tainted by the tourists. This is where you can meet the locals and see how they live their everyday lives. All the expats and digital nomads also hang around, mainly to sort their visas. Bali is gradually becoming a destination for people who work remotely. Understandably so. The living is super cheap and the island is beautiful. Who wouldn’t want to live in paradise? You can’t beat an apartment with a pool for a couple of hundred bucks a month. Hot meal with a beer for $2.5? Sign me up. 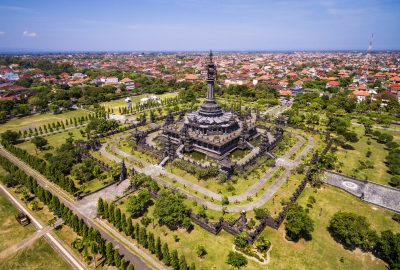 Bajra Sandhi in Denpasar: a monument dedicated to the struggle of the Balinese people for independence; here one of the most tragic events in Bali of the 20th century took place: the ritual suicide of the Balians in protest against the Dutch colonial authorities

I wouldn’t call Denpasar “unique”. It is like all the large cities in the region: messy, chaotic, crowded, and full of character. Go out and do some shopping, you’ll need a sarong. See all those statues wrapped in fabric? That’s a sarong, called kamben in local language. You won’t be able to access several key landmarks without one. I’m talking about all the Hindu temples; it is a religious country after all. Not to mention wearing a loose sarong feels great in these climates. Entrances to the Hindu temple grounds are a sight on their own. They symbolize the border between the common world and a holy place. Like the Handara Gate, one of the most photographed places in Bali. It is stunning with its open structure connecting heaven and earth. Shame how it loses its charm when it’s on every other Bali Instagram post. The temples located in Denpasar are thankfully not very “instagrammable”. Pura Agung Jagatnatha is the largest one in the capital. It was built in the 1950s, but it looks at least a thousand years old. It doesn’t even have any staff on site, it gets taken care of by volunteers. The area is massive so they must be proper devotees. Don’t miss out on the ritual puppet performance held here twice a month.

The temple and everything worth seeing can be found around the Alun-Alun Puputan. That’s the centre of Denpasar with the imposing Catur Mukha statue. Puputan stands for all the fighters sacrificing themselves trying to oppose the Dutch occupation. Like kamikaze, but without the airplanes. There’s a monument dedicated to those heroes wearing mandatory sarongs. The park complex surrounding it is pure bliss, but make sure you visit the nearby Bali Museum. It consists of a courtyard with several pavilions dedicated to different aspects of Balinese culture and history. The Royal Palace is close, it’s open to the public for a small donation. The Bajra Sandhi Monument is another tourist staple in Denpasar. The remarkable monument commemorates the struggles of the Balinese people throughout history and is located in front of the Bali Governor's Office. On the first floor you will find dioramas covering various events in the history of the Balinese, such as the Balinese kingdom, the introduction of Hinduism, Dutch colonialism, and the fight for independence. The second floor has a meditation space and offers panoramic views of Denpasar.

Those are the all the major landmarks in Denpasar. Stick around for a day or two to experience the nightlife and the authentic food. Obviously, there’s food and nightlife all over Bali. But here it’s more local and unchanged for the tourist crowds. But rest assured that on Bali and even in entire Indonesia you just can’t get wrong when it comes to food. Being Dutch by origin I was lucky to get acquainted with Indonesian cuisine at young age already and I will never stop eating it for the rest of my life. When I want to introduce it to my foreign friends I usually order an Indonesian rice table, which features highlights of various Indonesian food cultures and – influenced by Dutch colonization – includes even Indian ingredients. All main and side dishes are put on the table at the same time and everyone can compose his own menu. Having an Indonesian rice table is not only about the eating itself; it can last for hours and the social element is equally, if not more important.

Rent a scooter and explore around the capital. Scooters are popular since Bali is a relatively small island and most stuff is easily reachable. That is at least what I did when I visited the island for the first and last time so far and it turned out to be an unforgettable journey. I made a stop at Ubud, which is considered to be the cultural and spiritual capital of Bali and know for its galleries, art cafes and workshops. I went snorkelling and seeing dolphins at Lovina Beach in the North of the island. I climbed volcanoes during the middle of the night and could cook eggs for breakfast in the smoking hot sand. Watching the sunrise at Mount Batur (Gunung Batur), located next to the active volcano Mount Agung (Gunung Agung) is spectacular and I found it one of the most impressive experiences in my life. Mount Batur features a "double caldera" (a crater inside a second crater) and is undoubtedly one of the most beautiful natural phenomena on Bali. 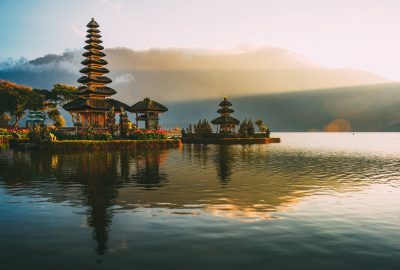 On 50 km distance from Denpasar you can admire Pura Ulun Danu Beratan temple: a sacred place for the Balinese, stunningly located on the shore of Lake Bratan in the caldera of an ancient volcano

When you say Bali, you say temples. Tanah Lot Temple is without a doubt the most famous and popular one with tourists. The sacred Hindu site located about 20km from Denpasar. Legend has it that the founder of Balinese Hinduism rested on this off-shore rock and proclaimed it sacred. Now it’s one of seven sea temples closely connected to local mythology. We’re talking 16th century, it’s a rather fresh mythology. They worship sea monsters here, how cool is that? Tanah Lot can get busy especially when it’s pilgrimage season. It’s also hugely popular with tourists because it offers a spectacular view, especially during sun set when it turns into a stunning dark silhouette to the backdrop of a deep red sun sinking in the sea. Another popular temple is Pura Ulun Danu Beratan, or Pura Bratan, a major Hindu Shaivite Shiva temple complex on the shores of Lake Bratan (Lake Beratan) in the mountains near Bedugul. This temple is also called the "Bali temple on the Lake" because it looks as if it is floating when the Bratan River rises.

If you’re not much into temples or not the exploring type of guy you have plenty of other options on Bali. Why not indulge yourself in mainstream tourism if sandy beaches, bikini babes hip bars and posh hotels are more your cup of tea? In that case you better stay around Kuta since it has all the great beach resort stuff and a vibrant local nightlife. The sunset at Kuta beach is also called the most beautiful in the world; so that is another reason to go there. Kuta is where you’ll find the down and dirty parties. In October 2002 Kuta was the centre of the world news when local nightlife was severely hit by bombings of Indonesian Islamic terrorists. The Paddy's Irish Bar and the nearby Sari Club were picked as a target because they were seen as the local Sodom and Gomorra by the extremists. The 202 deadly victims came from 21 different countries and especially many Australian youngsters who go there traditionally for surf and fun were killed or heavily wounded. The terror attacks had a devastating impact on the local tourist economy and the pain due to so many young lives destroyed will never be healed entirely. But it’s also encouraging to see how resilient people are. They go on with life and after a while they even start to celebrate life again.