Marbella is famous for being a playground for the rich at the Spanish Costa del Sol in the Andalusia region. Crowded with B-class movie actors and “the new rich” Marbella is not much more than a resort, a pretty face with nothing between the ears. That’s okay; some people like to spend their time away from home, sunbathing on a beach while sipping on a Piña colada, or playing golf, or clubbing during warm Mediterranean nights. La Milla de Oro (The Golden Mile) is the focal promenade of the area. The best clubs, boutiques, restaurants and out-of-this-world villas are located on that strip reaching west to Puerto Banús where the real money is docked at a yacht marina. That’s pretty much it: yachts and villas, cocaine and caviar.

Puerto-Banús, locally referred to as just "Banus": the playground of the international jetset in Marbella and filled to the brim with multi-milion dollar yachts 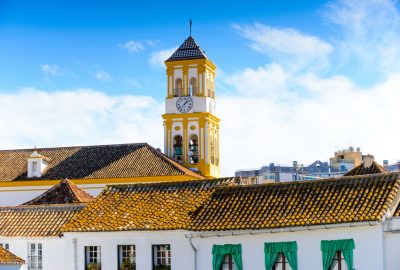 The Iglesia de la Encarnación (Church of the Incarnation) built over an old Moorish mosque in Marbella; as everywhere in the South of Spain after the reconquest by the Catholic Kings most mosques (Mezquitas) were destroyed or converted into Christian churches

If you feel like checking out some museums, or historical sights you have obviously arrived in the wrong city. Sure there is the charming Old Town and the Bonsai Museum, but I’m not sure whether it’s funny or just plain sad. Remember that where there’s money, there’s also crime and that’s another thing Marbella is infamous for. The Costa del Sol in general is a strategic area when it comes to smuggling drugs into Europe. Russian, Irish and English gangs don’t even try to hide that they’re fighting for control.